Consistency, Creativity and Commitment: The Story of Community Partners in Action” is CPA’s new pictorial history book. This limited edition tabletop book was written by Gordon S. Bates, CPA Executive Director Emeritus and Historian, and is based on his complete history of CPA, The Connecticut Prison Association and the Search for Reformatory Justice (Wesleyan University Press).

The book chronicles CPA’s historic role in the evolution of the Connecticut Criminal Justice System. It is a beautiful keepsake, filled with 90 pages of fascinating stories, quotes, pictures and newspaper excerpts, dating back to our beginnings in 1875. 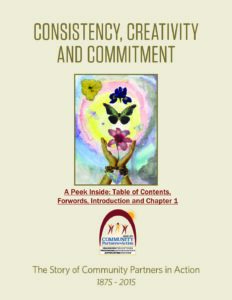 “Click on the cover to take a peek inside.”

How to Order Your Copy: The CPA History Book can be yours with a gift of $150 or more to CPA. All proceeds will support CPA’s greatest needs, including our mission driven projects and our operational foundation.

Captions for featured photos from the book:
1) The Allyn House, location of the first founders’ meeting in 1875.

4) Mark Twain, good friend of Charles Dudley Warner and adviser to CPA in 1875.

6) Activist Dortha Bushnell Hillyer, member of CPA Special Committee on Delinquent Women, 1917-1919. Dortha was also the founder of the Bushnell Theater in Hartford.

10) “Hope”, a mural created by Adalberto Rodriguez, a former CPA client, at the Hartford Alternative in the Community Program on Windsor St. – 2011.

11) Residents of Mart’s House, a reentry transitional house for women – 2016.