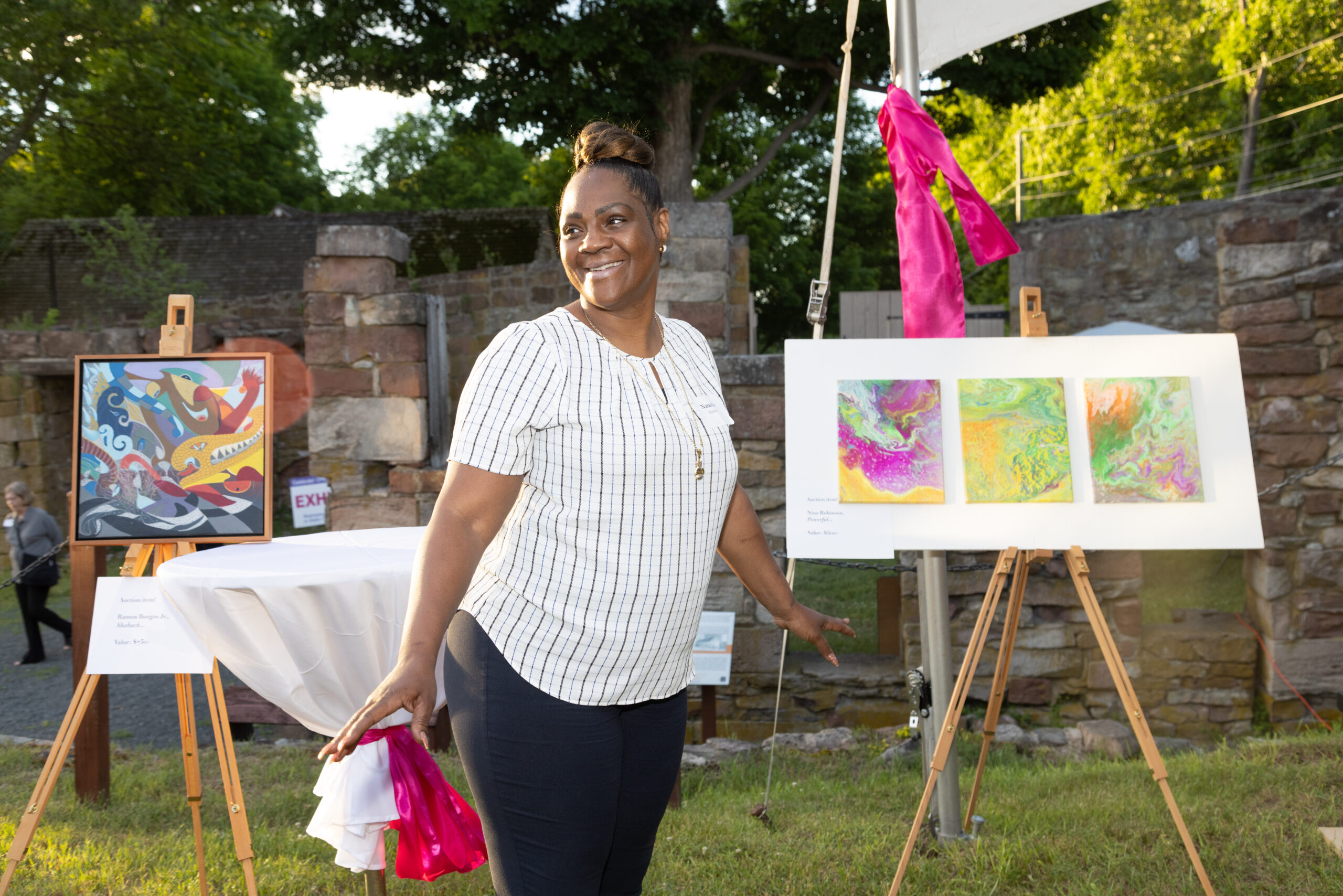 Arts Program Gives Life to Those Who Are Imprisoned

Art has always been a symbol of our shared humanity and a window into the hearts and minds of its creators. On a picture-perfect evening in June 2022, friends, donors and partners of Community Partners in Action attended Celebrate Prison Arts, an event dedicated to the program that supports people presently and formerly incarcerated in Connecticut prisons. The evening took place at the historic grounds of Old New-Gate Prison and Copper Mine.

CPA’s Executive Director Beth Hines warmly greeted guests before they joined others for the evening to support the Prison Arts program, a source of second chances for those committed to using art to heal and to turn their lives around. Describing the program Hines said, “Established 44 years ago, Prison Arts is one of CPA’s longest running initiatives and is a testament to holistic alternatives and their long-term positive impact on individuals and their loved ones.”

In his 31 years at Community Partners in Action, Prison Arts Program Manager Jeff Greene has worked with thousands of artists. Green added, “Incarcerated people often feel isolated and powerless, which leads to a sense of lifelessness and sadness. Art is designed to destroy hopelessness.”

Natasha Kinion, prison arts alumna and author, shared her transformative life story and deep appreciation to donors. She talked about the importance of donated supplies including paper, paint, pencils – especially the Prisma color pencils – and how no donations go to waste. “When I stepped inside the art workshop where Jeff Greene taught, he told us to leave the prison behind,” said Kinion.

Kinion was imprisoned when her daughter was just ten years’ old. Throughout her sentence Jeff Greene helped to send her artwork home to her daughter as gifts of love and gifts of inspiration. Prison Arts also touched her daughter’s life as the proud mother announced her daughter completed a bachelor’s degree in fine arts.

The Justice Dance Performance Project entertained the audience with Emergence at Old New-Gate, which was comprised of storytelling, poetry and dance by three individuals who were formerly incarcerated. Through their creative reflections the audience caught a glimpse of their interior lives, underscoring their remorse, the cinderblock walls in prison and their desire to live a better future.

Jacques Lamarre, a member of CPA’s board of directors presided over an art auction featuring the works of three artists who produced acrylic and mixed media on canvases and a large metal sculpture. Deb Rogala, director of operations at CPA joined Jacques on stage to engage the audience with banter, dance steps and jokes. The items auctioned off included:

Collectively, the creative works auctioned at Celebrate Prison Arts raised close to $60,000 all of which will support CPA and the Prison Arts program, once expenses are covered.

Thea Montanez shared her support of CPA and commitment to prison arts, which began with a family member. “My cousin has been incarcerated for nearly 30 years and our family’s experience has shaped my advocacy work. The truth is, I’ve gotten more out of this work than I put in. It’s helped me heal and working with champions like CPA, I hope I’ve been able to do some good.”